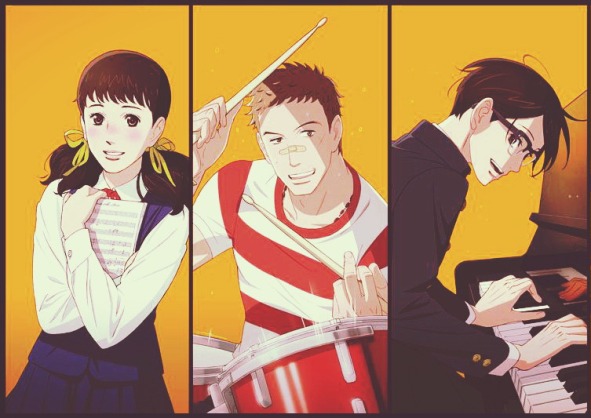 Story – Nishimi Kaoru has moved from city to city and school to school because of his father’s job, so having his first day at a new school was just routine for him. Being intellectual in addition to being a transfer student all the time, he has always been seen as an outcast. All he has had to do was bear it as usual until the next time he moved.
But things were slightly different this time. First, he started to get close to the class president, Mukae Ritsuko, and secondly, unlikely as it seemed, he grew closer to Kawabuchi Sentaro. Sentaro was infamous for getting into fights, skipping class and was an overall bad boy. Strangely enough, the three of them find common ground in music, namely jazz, and Kaoru finds himself actually enjoying the new town. *Source Mangafox

Ever wanted to just sit back and escape from reality by diving into the depth of love, friendship & melody? Then ‘Sakamichi No apollon‘ is the best choice for you. The show being a bit under-rated, I was really surprised by how much I loved it. In my opinion, it’s one of those few Anime around that are true to their manga counterparts, or even better in some aspects. Intense story, real-life characters, ups and downs of emotions, and lastly, Music; all these features instantly made the show one of my favorites. This anime is something that I will remember for many many years.

Shows like ‘Kids on the slope’ again proved that at the end of the day, a good plot and it’s perfect execution is all that matters. The story was handled in a mature way. It was beautifully developed with dramatic twist and emotional elements. Friendship, Love, passion, sacrifice, angst; you will find a perfect mesh up of these human emotions. The show literally gave me a taste of a pure slice of life.

As a SOL Anime, I think the pacing was perfect. Opinions may differ, but I didn’t find a single dull moment. There were twist and turns, emotional ups and downs, eyes catching musical performances and few ‘woow’ moments; so I had every reason to enjoy this show thoroughly.

One of the reasons the Anime adaptation felt better than the manga at times was it’s Music. The main focus of the show was ‘Jazz’ and even though I’m soo not into this category of music, the show felt no less amazing. Watching the characters performing and listening to the music gave me goosebumps and brought life to the series. The musical theme was perfectly blended into the slice of life genre, making the show stand out.

The strong character build-up was one of the key points of the series. Again hats off to director Shinichiro Watanabe for pulling it off so accurately. The characters felt very real. Bon (Nishimi Kaoru) & Sentarou were an interesting duo with two completely different personalities and Ricchan (Mukae Ritsuko) was always there with those two like a true friend. They were the perfect example of real-life characters. They were happy, they made mistakes, they argued and reconciled, they cried and at the end made me cry as well. Throughout the last episodes, they were my favorite characters.

Not only the leads, but every single minor character were also lovable. Junichi and Yurika nailed it as minor characters. Compared to the main characters they were given less screen time, but that didn’t stop them from standing out. Whether it was their human emotions or their love for each other, I loved every single thing about their brief story.

If I have to mention one downside of the series it would probably be the art & animation. Not thoroughly bad but could’ve been better. The voice acting didn’t seem much friendly to listen to either.

Sakamichi No Apollon is one of these few Anime that will captivate your heart right off the bat. Its perfect storytelling, relatable characters, and mesmerizing melodious acts will leave a mark in your heart. It’s a short series about finding the hidden message behind love, friendship, sacrifice & passion. I highly recommend this show.