Anime Review – Kyoukai No Kanata / Beyond The Boundary 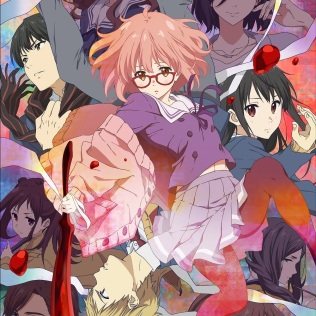 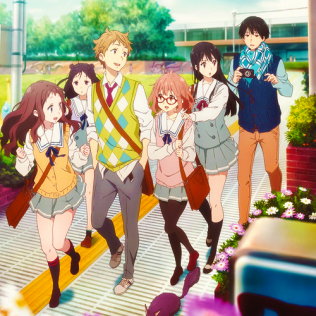 Summary – Akihito Kanbara is a high school sophomore in the literature club who believes himself to be a “Meganest”, and although he appears to be human, he is actually half Yōmu, which makes him invulnerable to wounds, due to the fact that he can heal so quickly, and also immortal. One day, Akihito meets freshman Mirai Kuriyama when it appears as if she is about to attempt suicide by jumping off of the school rooftop. Mirai is isolated because of her ability to manipulate blood, which is considered heresy even among other members of the underworld, so she is shunned. Soon after Akihito saves Mirai, disturbing events begin to arise. *Source ANN 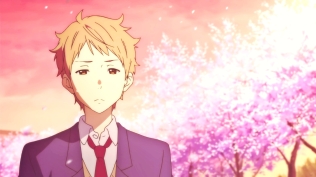 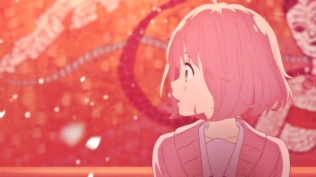 A supernatural Anime with a good amount of comedy and romance, Kyoukai No Kanata was definitely something I was looking forward to. However probably because of my high expectations, the show failed to affect me the way I thought it would. No, I wouldn’t say it was thoroughly disappointing, but the overall impression was not quite satisfactory. Even though the Anime had it’s flaws, it can’t also be denied that it had few awesome moments at the same time.

Talking about the negative parts, I think the supernatural theme just didn’t work out, cause the whole set up was more fitting for the school life or slice of life genre. The way the show started, a darker tone was naturally expected, but as the story progressed it was falling short in this regard. 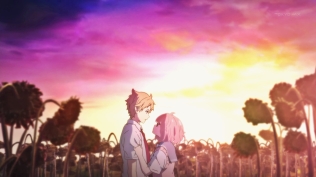 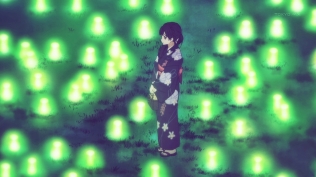 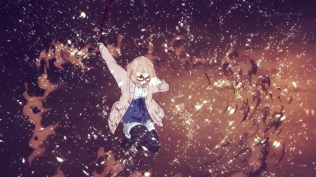 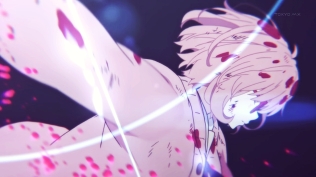 The first few episode were promising, the animation and art were drop dead gorgeous, so I thought that the show would only get better, but all my good vibes were turning into negative ones as I just couldn’t get emotionally involved with the show for some reasons. Story/characters were not given much scope for development. Be it the sister complex or Akkey’s weird mom, those forced comedy elements were just ruining the feel for me. Specially when the idol episode was put into the story, I got entirely distracted from the plot and dropped the series halfway.

On the bright side, the art and animation were just 10/10.  The gorgeous looking characters, artistic way of presentation and specially the fight scenes were a treat for the eyes.So despite the unsatisfactory plot development, I resumed watching the show and I must say I enjoyed those last episodes more or less. The story was going somewhere and some moments were beautifully executed. The pure romance between Akihito and Mirai was also highlighted in a cute way, something which I was craving for. Their connection was visible throughout show, and it reached it’s peak in the latter episodes. 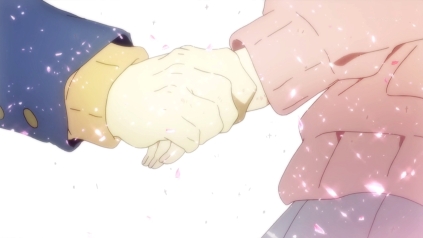 The ending felt rushed and a bit complicated. Some of the scenes made no sense to me whatsoever. Mirai’s repeated death & resurrection seemed irrelevant and ruined the overall impact of the previous episodes, though it would be a lie If I say I wasn’t glad to see her alive. 😛 But my point is, the whole death and revival could be executed in a more emotional and less stretched way. I’m yet to watch the movies, but as a stand alone the Anime ending was not satisfactory, probably cz I was expecting a lot more. 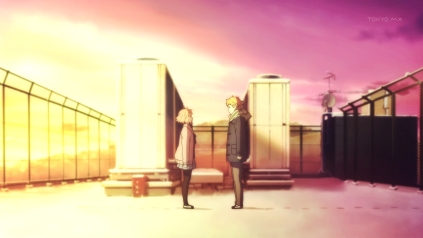 Even though the series was only 12 episodes long, a lot of characters were introduced thought out the show. As the main protagonist, Mirai was really cute. Those big red glasses made her look freaking kawaii! Her innocence was adorable and the last few episodes made me love her character more. Loved Akihito and his weird fetish as well.

I personally loved Izumi Nase and her brother Hiroomi Nase for delivering few breathtaking fighting scenes. I wish I got the chance to see them fight more often. However the rest of the characters couldn’t stand out as they didn’t get proper development. They were there in the show for a good amount of time, but I couldn’t connect to them emotionally.

Final Review/Thoughts – The show was good, but the inconsistent & flawed storytelling ruined the overall development. It had a good theme and the characters were unique, if utilized wisely this show could’ve been a lot better. Putting aside the negative points, the eye catching animation, artistic presentation and combat scenes were one of a kind, which made the show worth watching for me.