Story – Dan-Bi (Kim Seul-Gi) is a senior high school student. She has a special ability which allows her to transport to anywhere on rainy days. For her university entrance exam, Dan-Bi can’t deal with the pressure and runs off to a playground. Without knowing why, she goes into a puddle and finds herself transported to the Joseon period. There, she meets Lee Do (Yoon Doo-Joon). He is a young King of the Joseon period. Lee Do is in a difficult situation due to droughts and the spread of an epidemic. *Source asianwiki

My thoughts – The drama was downright enjoyable. It was only 2 episodes long but it managed to capture all the positive aspects. I used to avoid historical dramas cause I had this feeling that they tend to be somewhat boring. How wrong I was! The fusion of history and present life was thoroughly fun to watch and the romance between a high school girl and a king was like the cherry on top. 🙂 Starting from the very first moment the drama managed to get me hooked and the enjoyment remained till the last moment of the show. 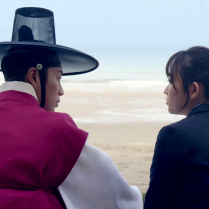 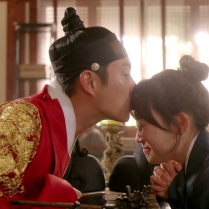 Yoon Do-joon and Kim Seul-gi were the perfect casts for the characters. Their chemistry, comedic performance and acting made the show worth watching multiple times. Kim Seul Gi gave life to the character ‘Dan bi‘, who was a funny & quirky high school girl burdened with pressure from studies. She had the potential within, but was not confident enough regarding her entrance exam which made her want to disappear to a distant land. Which is what happened, and we got to see our King Yoon Do joon. He was charming, caring and funny as well. I enjoyed every screen time of the main leads. Their connection was pure and heartfelt. Whether it was doing maths together or hugging, they looked adorable in everything. 🙂

Everything in the drama was well balanced. The comedic scenes, romance between the leads, development of the the characters and plot everything was satisfactory. I’m glad that the story was not cliched or dragged, it was short but perfect and that was one of the positive parts of the show. Within only 2 episodes it also managed to show various kinds of side characters, among which ‘Ahn Hyo Seop‘ as Park Yeon was my personal favorite. He totally nailed the character and I think the historical theme and cloths suited him a lot. 🙂 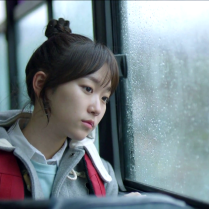 I personally loved the cinematography. The historical theme was perfectly handled. The beautiful natural landscapes, old Korean house structures, gorgeous attire and the perfect camera works were a treat for the eyes. Music on the other hand was somewhat okay.

Final Thoughts – Would I recommend this? Definitely yes. On one fine day, you can watch this short drama in one go and trust me you wont regret it. 🙂